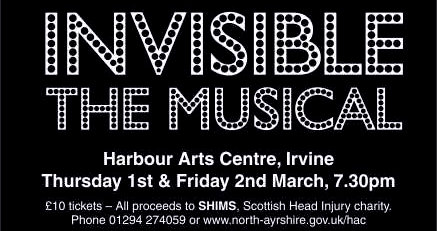 Following the great success of a new musical, Invisible, by Robin Lucas and Drew Cochrane in last year's Players summer season the new stand-alone version will be tested on the stage of Irvine Harbour Arts Centre on Thursday and Friday, March 1 and 2

Pat Nicol, Drew Cochrane, George Whitestone and Gordon McMurray of the Largs Players will appear in the world-premiere musical, Invisible 'a musical for head cases' at the Harbour Arts Centre, Irvine on Thursday and Friday, March 1 and 2 at 7.30pm.

They will collaborate with singer-songwriter Robin Lucas and his band along with members of The Sunshine Club, a group started by Quarriers for adults who are recovering from ABI - Acquired Brain Injury. No fewer than four of the Sunshine Club take leading roles in a production which delighted Largs Players audiences in Lounge and the Brisbane Centre last year.

The new show (45 minutes each way) will feature more of Robin's great songs, inspired by his own recovery from a serious head injury and has lots of laughs and, possibly, tears as the cast tell amazing, true stories. It will be promoted on the Kay Adams' BBC Radio Scotland morning programme before the opening on March 1.

Drew who is directing the musical play said: "Last year's short version was inspirational and audiences seemed to love it, particularly the great music. We are collaborating again to raise funds for SHIMS, the Scottish Head Injury Musical Support group, founded by Robin after his own horrendous car crash.

"I hope those who saw it before will be keen to see what we have done with it as a stand alone show."

Tickets at only £10 are on sale at the Harbour Arts Centre and online at Ticketmaster.